Women, your voices are heard!

Women, your voices are heard!

We have been reflecting on and sharing stories of three Women of Significance this month: their unique and yet slightly similar journeys. The uniqueness is seen by Maria experiencing the marathon- like determination needed to change from employee to entrepreneur in order to live her dream; it is seen in Sarah deciding to exchange her heels and the perceptions that go with being a woman in the business world, for more comfortable Doc Martins, and in this way being true to herself and engage with issues that are close to her heart, and it is seen in Ethne taking the courageous step to discover her worth at all cost so as to live and lead intentionally. And yet, we can depict themes that draw them together: standing for what they believe in, recognising their true worth and contribution to the world around them, and doing whatever it takes to get to that dream.

It becomes evident, that, while there has been positive change for women within the workplace, these opportunities are not easy to come by – and the struggles in some cases not worth the sacrifice. So the question arises: do men see this? And what are they doing about situations where inequality and even discrimination occur? One man took it on himself to journey through Women’s Month and to contemplate the essence of what this celebration is really all about, and concluded his reflection  by saying “I found myself thinking about how this journey of reflection and writing has challenged me more than I could have known when I agreed to this”. And there lies a glimmer of hope: WOMEN, your stories that speak to your struggles and your achievements deserve to be heard!

Men, as you engage more with your female counterparts, not just listening, but seeking to equip yourselves with knowledge and become proximate with those situations that subtly reek of inequality, you will join in a battle that is worth fighting for. 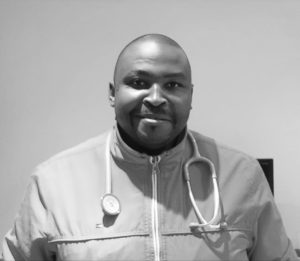 I am a medical doctor. I grew up in the rural outskirts of the Eastern Cape, and had the privilege as a young boy of being raised in three different homes, two of them were headed by men (my uncles), and the third by a woman (my aunt). What I learned from the men in the first two households, was how they took responsibility of providing and protecting the (extended) family. These men became my role models and taught me the importance of striving to live with integrity, honesty, love and loyalty to family and spouses. Their yes’s were yes, and their no’s, no.

It was with my aunt where I learnt what women are and what they do to sustain their families. My aunt was resilient, strong, disciplined and managed the household well. Even though she earned little, she managed to sustain a large family of six people.

It was her character, her values, perseverance and her determination to give us a better future through education that informed my years into adulthood. Women such as her are to be valued, respected and thanked ever so often for their selfless giving to children or others in need.

The medical profession was an interesting space during my training, where traditionally doctor titles were carried by men, whilst nurses and matrons were women. Women in the past had to choose from a few limited roles available to them. Today, more women within medical faculties are graduating as doctors, specialists and head of departments. To be honest, however, when women move into leadership positions, it is known for there to be increased resistance towards them; a resistance that is not shown openly, but rather in subtle ways. For example, questioning their directives or how they go about implementing strategies. Over time this underlying resistance may disappear, but can be pulpable initially. In other words, whilst on paper equality within the workplace may be evident, it is in these indirect, non-verbal manners that inequality is present, that is, if we take time to notice. In this way, women most probably have to work extra hard to stand their ground and prove their worth. Within the wards and hallways of both public and private healthcare settings, patients sometimes show their bias in that for example men patients refuse to be examined by a female doctor (and sometimes even struggle to accept their professionalism or position only due to them being females). Whilst this trend is becoming less, it shows that a paradigm shift is needed.

These challenges most probably extend beyond the borders of a hospital and into various spaces, where women have to work extra hard to stand their ground and prove their authority. The traits I have witnessed in my aunt, I often witness in the women I live with and experience all around me. They show resilience, work hard and show selfless generosity. However, those women that seek to find that space where they can offer their abilities and skills, are at times faced with resistance from the workplace itself and/ or their male counterparts. If men resist being managed by women in a hospital set up, it can be assumed that the same occurs in other organisations. Whilst empathy and compassion may be seen as valuable attributes of women, there is a tendency to expect them be lived out in the traditionally more female-dominated areas. When women are empathic or show compassion within other industries or organisations that are male-dominated, it is quickly seen as a weakness or an opportunity to manipulate or even abuse. And if the system or her colleagues are not aware or speak out against this, women are left to either fight for their space, find deep inner reserves to grow and develop themselves, step out of that system to seek alternative solutions or ventures, or conform and believe they are inferior to their male colleagues. Again, it is these subtle, discreet and non-verbal cues that workplaces either ignore or don’t recognize.

Do we men ask where the determination and resilience of women comes from and what they have to go through to achieve? Do we ask questions that reach deeper than the more superficial “How are you?” without waiting for an honest response? I have heard men say in a discussion around equality that it is “not our issue”, in other words not our battle to fight. However, by having to journey a bit on this topic, I realized: it is our battle as well. When we see any form of discrimination, we should raise the issue, whether it be difference in salaries, the way women are spoken to or spoken about, or treated (maybe even by ourselves) in front of others. We cannot work alongside women and speak about equality, when it is not experienced as such by our female counterpart. Finally, when a female colleague is promoted and experiences resistance, we should step in and address it, whilst giving our support to the person chosen for being best suited to the job.

To the men out there: these reflections have led me to conclude that as men we have to stand with women. Listening to their views may help us understand their challenges – we should be listening more and take their responses seriously. And we need to learn to ask questions and engage with our female counterparts about their true experiences. Let us not merely be spectators when we see inequality, let us not remain passive when we see our female peers in their struggle or being treated unfairly. In order for us to know what inequality looks like, and know how to engage constructively we need to be proximate, equip ourselves with knowledge around gender equality and begin to realize that seeking equality is not a struggle for women to fight only, it is a struggle for all of us to be a part of to bring about a societal shift. In this way, hopefully we stand together, side by side. We have women all around us: Mothers. Spouses. Sisters. Daughters. Colleagues. Friends. Enemies etc. We play a part in changing the narrative.

To the woman out there, I would like to say: there is a place for you in this society. You are the fertile soil that nurtures a seed to grow, you bring stability to society and the community you live in, work in and move in. Never, under any circumstance underestimate yourself and the role or position you occupy, as YOU and your role in the way you live it out can never be filled in this way by any man. Your experiences and story deserve to be heard as they speak about and prove your inner strength. Use your strengths to bring about change wherever you are.

Believe in yourself, in who you are, for you are Strong, you are Resilient, and you are Powerful!